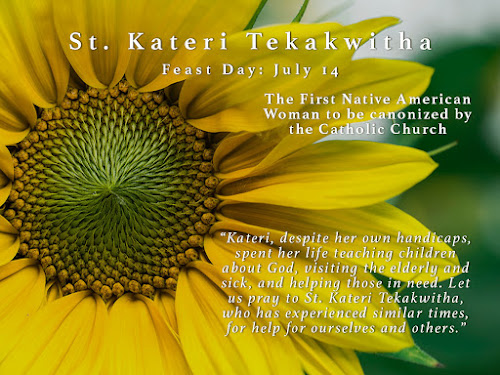 This month I am focusing on the Feast of St. Kateri Tekakwitha, which is July 14. Although Kateri was born in 1656 at Ossernenon, near modern Auriesville in New York, surprisingly, many of her life experiences were similar to our current experiences. However, in spite of, and maybe because of, all the challenges of her life, she developed a deep spirituality and became the first Native American woman of North America to be canonized by the Catholic Church.

Kateri's mother, Kahenta  was of the Algonquin Tribe and a Christian. During a raid by some Mohawks, she was captured and had to work as a slave among the Mohawks. However, she was being closely observed by Kenneronkwa, a Mohawk chief, who was impressed with her kindness and forbearance in the midst of difficult circumstances. Eventually, he fell in love with her and chose to marry her. Thus, Kahenta was adopted into his tribe.  Kateri was the first of their children. Later they had a baby boy.

Kateri was born into a world where one group fought against the other and frequently enslaved the other or subjugated them. At the same time, the French Jesuit missionaries were attempting to bring the message of Christ and the spirit of love to the world.

Kateri's mother had become Christian. However, in her adopting tribe, she was unable to go to church or have Kateri baptized. Nevertheless, she did share her faith with little Kateri who was only about four years old when her mother, father, and baby brother died of the smallpox plague. Kateri also was struck by smallpox but managed to survive. Nevertheless, she was left with a severely disfigured face, very limited vision and a weak body.

When her father, the great Mohawk War Chief, Kenneronkwa died, the village matriarchs chose his brother Iowerano to replace him. As was the custom in the Tribe, Kateri was adopted by him and he moved into the Longhouse of his late brother, bringing his wife and aunt with him. It is believed that he was very kind to Kateri. While it was proper for him to raise his late brother's child, it was also a wise political move since he had no children of his own. He probably hoped that she would marry a fine young warrior and carry on the lineage of his family. His wife and aunt welcomed her with love.

Kateri proved to be great asset to the family with her gentle ways. In spite of her health issues, Kateri helped the family with gathering wood for fires, cooking meals, sewing, bead work, etc. She showed attraction to the Christianity, brought to the Mohawks by French Jesuits. Kateri’s uncle did not like this and the family was concerned about her lack of interest in marriage. After all, that would interfere with their plans to have a son-in-law who would carry on the lineage of their family. They even tried to trick Kateri into an arranged marriage when she was seventeen. Nevertheless, Kateri was alert to the effort and removed herself from the situation.

One day when most of the women were involved in harvesting the corn crop, Kateri had to stay home because she had injured her foot. Fr. Jacques Lamberville, a Jesuit priest, was visiting in her Village. When she shared with him her desire to become a Christian, he agreed to instruct her.

At age nineteen, she was considered ready to be baptized. On Easter Sunday, April 18,1676, she was baptized and given the name, “Catherine” after St. Catherine of Siena. (Kateri is the Mohawk form of Catherine.)

The following was recorded by Father Cholonec., S.J., who wrote what Kateri said:

"I have deliberated enough. For a long time my decision on what I will do has been made. I have consecrated myself entirely to Jesus, Son of Mary, I have chosen Him for husband and He alone will take me for wife."

Once it was known that Kateri would never marry and provide a family to ensure the lineage of her uncle’s family, she experienced a lot of persecution.

Today we have many people of integrity who are being persecuted too, once they are deemed to no longer be useful to advance the desires of others.

Nevertheless, Kateri, despite her own handicaps, spent her life teaching children about God, visiting the elderly and sick, and helping those in need. Let us pray to St. Kateri Tekakwitha, who has experienced similar times, for help for ourselves and others.

St. Kateri Tekakwitha, Lily of the Mohawks, pray for us.

St. Kateri suffered during her lifetime – illness, loss of family, and trials because of her faith. St. Katharine understood these trials; she had suffered illnesses and the loss of loved ones. She and the Sisters faced opposition in their efforts to work among the African American and Native American people. St. Katharine told the Sisters: “You are not going to go through life without having your patience tried.” Even as a young woman, Kate knew that her Lord said: “Come to Me all ye that suffer and I will refresh you.” Yes, we can expect difficulties in our lifetime but with the Lord walking beside us, the Holy Spirit to guide us and the Blessed Mother to console us, we can handle all the bumps along the way of our life’s journey.

Thank you, Sr. Annette, for sharing such interesting details of St. Kateri’s life. I am particularly touched by her intimate relationship with Jesus. Her refusal to submit to the expectations of others so that she could stay true to her desire to pursue a life of prayer and service reminded me of a quote from Matthew Kelly: “As we mature spiritually, we realize that to want anything other than the will of God is foolish and futile.” St. Kateri’s decision to follow Christ is a beautiful example. She would not have felt fulfilled had she chosen to placate the wishes of her uncle.  Kateri most certainly knew that her decision to embrace Christianity would result in criticism from her family and tribe. But she was driven by her great love of Jesus.

Father Richard Rohr wrote a recent article on St. Francis and St. Clare of Assisi in which he stated that they were “not so much prophets by what they said as in the way that they lived their lives. Their agenda for justice was the most foundational and undercutting of all others: a very simple lifestyle…plus a conscious identification with the marginalized of society. In this position, you do not “do” acts of peace and justice as much as your life is itself peace and justice. You take your small and sufficient place in the great and grand scheme of God.” Kateri, like Francis and Clare, who “within their chosen structural freedom, also found personal, mental, and emotional freedom. They were free from negativity and ego. Such liberation is full Gospel freedom.”

In reading your blog, I sense that you have many social justice concerns on your heart. July is historically a month of celebrating freedom. It appears as though we have drifted from our proclamations of liberty and justice for all.  Evangelist Alveda King, niece of Rev. Dr. Martin Luther King Jr., shared the following sentiments in her Independence Day blog, “Admittedly, these aspirations for our nation have yet to encompass the rights of all American people; especially those in the womb, those oppressed by the yoke of skin color racism, and other human barriers. However, Hope is still alive. We are not colorblind; we are not separate races. We just need to learn to see and hear each other.”

“There is hope that the imperfect union can still become a perfect union; one race, one blood, one nation under God. As we move forward, we must remember that as the human race, we are all made in the image of God.”

You gave us a glimpse of the world into which Kateri was born and drew comparisons to our society today. The message of Christ and the Spirit of Love were stronger than the injustices of the time for Kateri, and they continue to be the answer for us today. With a penitent heart we need to turn to the Lord, ask for His Mercy, Compassion and for His guidance so we can release the illusions of separation and alienation that divide us from one another. With Christ, change and renewal are possible. The most basic first step toward reconciliation is to examine what is in our heart. We may be unaware of indifference or prejudices that have taken root. Pope Francis cites the global indifference we as a society have toward our neighbor. We live very distracted lives. I think we need to pause and intentionally recommit to our responsibility as disciples. We profess to love Jesus, but we need to live out our Christ- centered discipleship on the streets. If we aim to open ourselves to others, love will replace fear and distrust, for perfect love casts out fear (1 John 4:18).

I read the following prayer on the website: https://www.kateritekakwitha.org/kateri/prayers. and thought it would be a lovely close to this  post.

“Loving creator God, we acknowledge your power and presence in the Four Directions of your vast and beautiful universe. We celebrate Kateri Tekakwitha, "Lily of the Mohawks", as one of your Son's most faithful followers. Help us to turn our backs on all evil and walk in her footsteps, sharing our love and Christian concern with others. Let us reverence, as she did, your mystical presence in the poor and suffering.” Amen

Posted by Sister Annette Marie at 6:51 AM 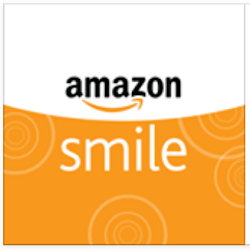 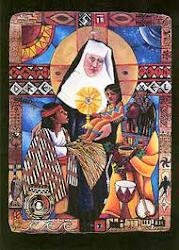